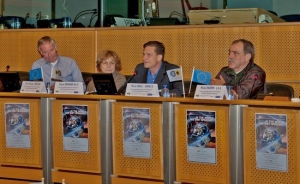 The Nature Protection Service (Spanish: Servicio de Protección de la Naturaleza, SEPRONA) is a unit of the Spanish Civil Guard responsible for nature conservation and management of the hunting and fishing industry.

The Municipal Council of 15 October 2013 in the framework of its powers of Local Autonomy agreed to approve a motion to reject climate manipulation practices being carried out globally, to support the complaint filed on July 19 SEPRONA past on aerial spraying in the Guarenya clandestine, and sign the petition to Parliament by Terra SOS-able the May 13, 2013 for an independent investigation into the allegations is conducted.

This is very important. It means that geoengineering longer exclusively a matter of high political, military and industrial areas to sneak into municipalities, at street level, where the Royal Society, with which no one has told you, you have the floor and claimed their rights an issue of such gravity, says Josefina Fraile spokesman Terra SOS-able, claiming that this makes the City’s Claw Quintana in the first town hall of the world in which decisions are taken of this caliber against geoengineering, so clear and unambiguous.

The residents of this town, he adds, should be proud to have a representative who represents them and defends their interests with all the consequences. Since there is no more common than the health of people and their environment well. One example that should pave the way for all municipalities in the region but the country.

Furthermore Fuentesauco Agricultural Board has also expressed in the same terms, already with the local Agricultural Board Castrillo, the second to reject these practices and support the petition filed with the SEPRONA to investigate facts with obvious impact in climate, crops and health.

These agreements are the result of the information door to door campaign waged by the complainant Association. The next step is to present petitions to council by council, requesting research collaboration and dissemination of this topic.

JAG Sustainable Terra, whistleblower of possible aerial spraying on The Guarenya, with impact on the health of people and the ecosystem, and land use as a possible area of ​​experimentation in changing the atmosphere, asks the mayors of the municipalities conducting a census of the implanted site for purposes of measuring and meet climate issues and other atmospheric aspects.
Also requested to provide a venue for prune explain this phenomenon and its effects.
Moreover, makers of Sustainable Terra, as Josefina Fraile and rancher Argujillo Marcos Alonso, presented to the Service for the Protection of Nature an extension of the complaint data ‘on clandestine spraying carried out on the Guarenya last year. ”
Among the managed documentation is collected, under ‘probation, theoretical and practical documentation of experiments modifying the atmosphere in the Spanish Levante, with the help of American corporations. ” They highlight that “Atmospheric modification activities of military origin, 1978 to 1985 initially channeled through the Department of the Ministry of Agriculture pest (presumably with knowledge of the agricultural unions), justifying an agricultural interest that Spain did not belong to NATO, while parallel air out experimental studies carried at the military base of the Arenosillo (Huelva) NASA hands. They argue that, once Spain ascribed to NATO, “these experimental programs in our country raise the bar, including new technological advances and patents.” For Terra Sustainable “is presumably considering its illegality longer carried out through the Ministry of Agriculture easily parliamentary oversight budget, from the Ministry of Defense, where a rigorous and reliable control is virtually impossible under the canopy of National Security. And meteorological studies. ”
Also recorded a listing of patents related to these issues and an explanatory document that “these materials fall into the surface and are biodegradable, toxicity unclear.”
Josefina Fraile keeps interest ‘report hyperactivity in the experimental area Remedhus, especially in Villamor. ” Allude to the Seprona postponed visit to the area, scheduled for 9th January, in order to identify the antennas, and assume that the delay will serve to “buy

Tweet
Councils in the area receive a dossier on alleged spraying

TerraSOStenible documentation sent to 29 towns of Salamanca, Zamora and Valladolid

IG A total of 29 municipalities of Zamora, Salamanca and Valladolid have received a dossier with information about the alleged clandestine aerial spraying that has been denouncing the organization Terra SOStenible and investigates a Court of Zamora.
The mayors of Alaejos, Argujillo, Toro Dome, Cañizal, Castrillo de la Guarenya, Castronuno, Cuelgamures, the Orbada Espino, El Cubo del Vino, The Maderal, El Pego, Piñero, Fuentelapeña, Fuentesauco, Fuentespreadas, Guarrate, Madridanos , Nava del Rey, save Rubiales, San Miguel del Ribera, Seven Churches of Trabancos, Topas, Toro, Vadillo of Guarenya, Valdefinjas, Venialbo, Goodland Bridge, and Villamor Villaescusa Squires already have in their possession the documentation provided by Terra SOStenible. “They now have the ball in your court and must respond to the requests that we present in that dossier” points the president of the organization, Josefina Fraile.
The Association last July 19 to denounce the Civil Guard Seprona activities “clandestine spraying” in Guarenya considered “vital to stop them, the population of the county is informed of what occurs on your sky and how it affects them and their cultures. ” They have therefore initiated an action of “door to door” to request a room where mayors to give a lecture. There are now three councils that have yes: The Wine Cube, and Fuentespreadas Cuelgamures.
Among the documents submitted motion model is attached to the mayors move to plenary ‘refusal to agree and support these activities to be carried out an investigation of the facts denounced by Terra SOStenible and farmers of the region. ”
The City’s Claw Quintana was the first to pass this motion to research calls only “the facts that affect us and it does not cost any money to the council.”

Scribd of this blogpost for downloading, searching, listening: 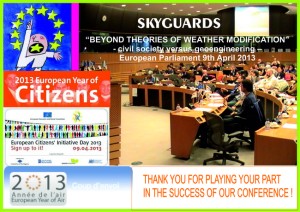