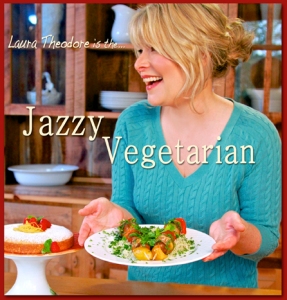 Greg, Liz, and Tom talk with Laura Theodore, the host of the public television cooking show, “The Jazzy Vegetarian.”  The show blends music and vegetarian takes on classic American dishes.  Laura tells us about the long road she took to a compassionate diet, and about the thrill she gets in welcoming special guests such as actor Ed Begley, Jr. and biochemist T. Collin Campbell on her show.  A successful jazz vocalist, she also talks about the unbeatable combination of food & music – her cookbooks also include music suggestions to accompany the meal.  http://www.jazzyvegetarian.com/

The musical selections on the show are performed by Laura Theodore: “DO RIGHT” from her Golden Earrings duo CD with Joe Beck, the “Jazzy Vegetarian” theme song, and ” OUR SPIRIT IS FREE” from We’re Only Human.

68 thoughts on “Laura Theodore is the … Jazzy Vegetarian”